I have an issue with my Cintiq 16 "loosing pressure" while I draw with it in photoshop. I'll try to describe the problem.

When I draw a line, sometimes, for a tenth of a second, the tablet detects a pressure that is null (or almost null) leaving a blank part in the middle of my drawing. It happens although the pressure I really apply on the pen doesn't change. An example below : 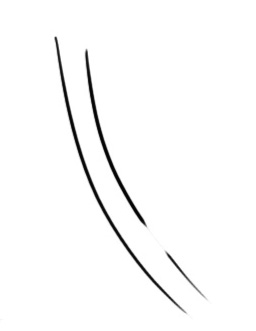 On the left is a line that is drawn normally. On the right is a line where the pressure has dropped in the middle of the drawing.
It happens on any part of the screen.

I tried changing the pressure settings and the issue happens no matter how I configure them. I also changed the nib of the pen, with no result.
My drivers are up to date, and so is windows.

While doing tests I noticed that the pressure showed in the settings when I draw does something like this :

It seems to be a hardware problem and I don't know where it comes from, the tablet or the pen, and if it can be fixed.

The tablet is one month and a half old. This started happening maybe two weeks ago, for no apparent reason, and it's deteriorating, happening more and more often.
Top

I don't use the eraser end often, but I made tests and it seems the issue doesn't happen with it.

I don't have other drawing softwares that use pressure sensitivity to perform other tests.
Top

If this doesn't happen with the eraser end, then the problem is the standard end of the pen and you need a pen replacement. Please contact support and explain the situation - https://support.wacom.com