I've come to notice that, after updating my tablet drivers for my Wacom Intuos Pro (PTH-660) to Version 6.3.38-2 on my Windows 10 PC, that the touch-input has become unbearably sensitive. I cannot rest my palm on the tablet while drawing anymore without activating a gesture; usually the two-finger scroll gesture, but also sometimes the 3-finger gesture to open the radial menu and zooming.

I've tried several programs, like Clip Studio Paint, Firealpaca and MediBang Paint Pro and there seems to be an issue in all of them; Clip Studio mainly had an issue with the two-finger scroll gesture, while MediBang results in erratic zooming that makes it impossible to draw.

For the time being, I've turned off touch, but I usually prefer to have it on for shortcut gestures. I'm considering going back to the previous driver version for the time being too. So, I would appreciate if you looked into this.

Thank you for your time!
Top

How do I remove this dumb setting where if I swipe from the right side edge, it opens my notifications?
Top

Can you please clarify a bit better what the issue is? Are you using touch or the pen? this is typically a Windows setting so you probably need to check the Windows settings menu.
Need immediate help? Contact our Support: https://support.wacom.com
Top

Re: PTH-660 - Touch much too sensitive after driver update

While this topic was still being approved, I already contacted support in the meantime. Initially, I was actually recommended to go back to a previous driver version. However, after doing so, which fixed my problem by the way, I was told that the problem had been solved. So, I went back to the current driver version 6.3.38-2.

Sadly, the issues came back the very moment I installed it. Even after trying to uninstall an re-install it multiple times, and going back to a previous version again in-between which again solved this problem, it just wouldn't stop with the current driver version. I answered the e-mail with a short explanation of my experiences and got asked If I'd like this issue to be escalated to the upper department, which I've agreed to. I've yet to receive an answer.

I turned off touch again for now, because I am tired of flip-flopping between driver versions, and hope for a solution to my problem soon.
Top

I have a feeling that you may have a similar problem as I do; ever since the current driver update, the touch settings on my Intuos Pro have been increasingly sensitive. I put this in further detail in this thread: viewtopic.php?f=6&t=4284

My Windows notifications also pop up sometimes when I swipe from right to left while resting the palm of my pen-hand on the tablet while drawing due to the increasingly sensitive touch. For the time being, I recommend turning off touch, at least until a new driver update comes out.
Top

Make sure this Windows setting is turned to ON: 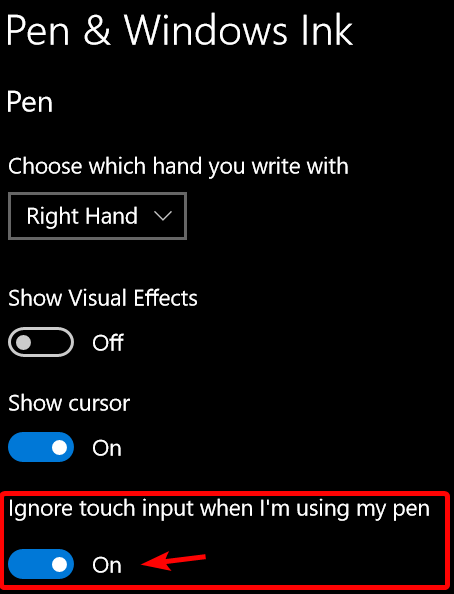 wacom5 wrote:Make sure this Windows setting is turned to ON:

OK This seems to have fixed this, for now! Thank you! I am just a bit confused, because I unchecked Windows Ink in the tablet properties. I'll keep an eye on this for now!
Top
Post Reply
7 posts • Page 1 of 1